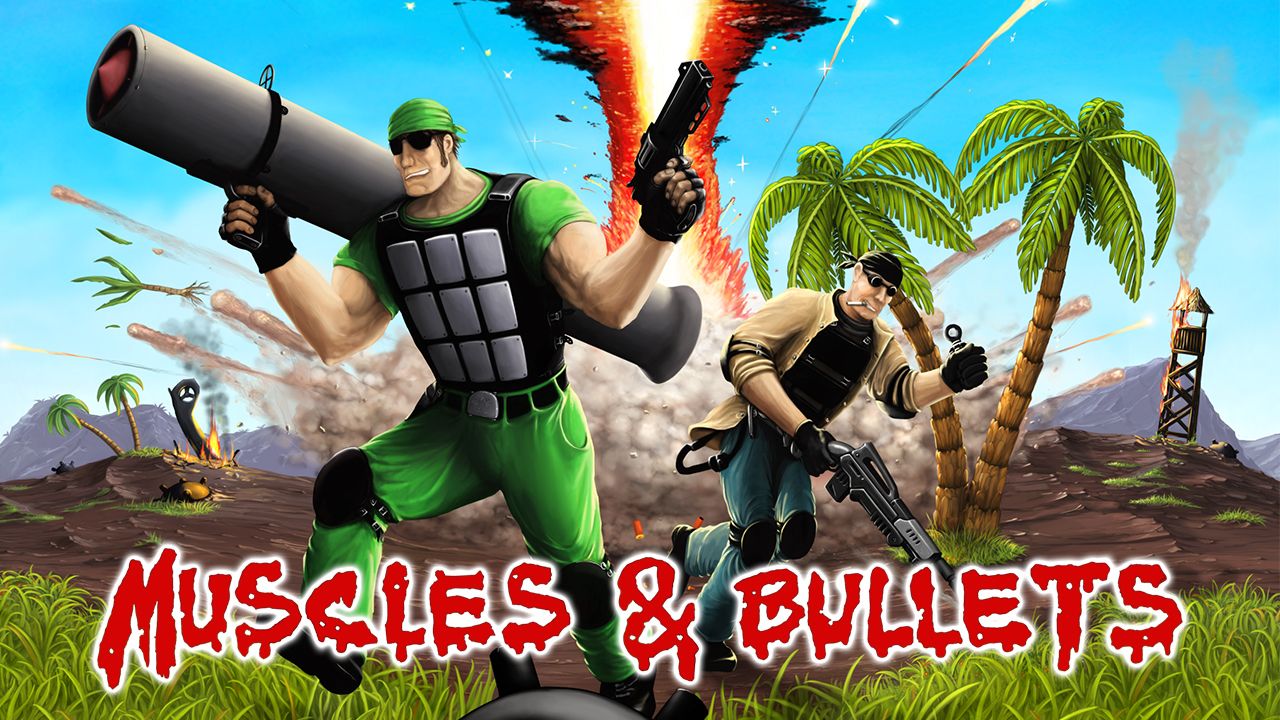 Play Video
An evil dictator has transformed a peaceful tropical island into a nest of mercenaries and terrorists, and now he’s enslaving the local population. Intel from our recon base indicates the presence of prohibited chemical and nuclear weapons within enemy territory. The dictator’s political allies are preventing international military action, so this mission has been entrusted to a secret agent named “Bazooka” Kurt and his partner. Their objective is to eliminate the threat by any means necessary – even if it means razing the entire island to the ground.

Run, shoot and destroy! Slain enemies on your way!

The action of the game unfolds on a large tropical island. This island nation is oppressed under the control of an evil dictator and calling for help. The full version features eight different, richly detailed levels, including: a jungle, a rainforest at night, a desert, a concrete bunker, an underground cavern, mine shafts, and even a castle!

Muscle and Bullets is a 2D “run-and-gun” platformer featuring fully destructible environments. Everything in the game, including enemies and the ground, can be completely annihilated. In addition to the core gameplay, which is focused on destructibility, carnage, and speed, Muscles and Bullets has interesting mechanics – special weapons and power-ups that grant various temporary effects with varying degrees of usefulness, such as: invulnerability, triple jump, speed boost, armor-piercing bullets, firing without reloading, and much more. A system of speed- and skill-based challenges will be added with randomized rewards in the form of temporary or ammo-limited super-weapons such as a cactus-thrower, a lightning gun, a drill gun, and more. We’re also planning to introduce melee attacks and kill combos that will allow the player to accumulate rage points. Once you’ve accumulated enough rage points, your character will temporarily enter “rage mode” which increases your health bar and allows you to deal deadly, lightning-fast melee attacks.

Various rare enemies will be found in the levels that must be defeated in order for the player to progress, as well as mini-bosses and a big boss at the end of every level. In the middle of every level will be a well-defended concrete base that the player has to take by storm.

In addition, we’re also planning to write a script and include humorous scenes. Especially for speed-runners, there will be a timer for the bosses and mini-bosses

Muscles And Bullets” has been released in Steam early access!

So much good news!

And we have several excellent news for the past time! First of all, we build a new demo-version of the game with a working drill